Yesterday I went to a new OB. I have decided not to go with the doc I saw for my first 3 visits because it wasn't a good fit. Without going into too much detail - her office was just too chaotic, lost some test results, not so good at follow-up, etc. I wasn't comfortable.

So, the new OB was really really good. Very confident and organized. She is in practice alone. I was a little concerned with that until I asked her who covers for her and the answer was "Two people - one is the OB who delivered my own two children, and the other is a colleague I work very closely with who is very highly regarded." So, this really isn't much different than the OB's all being in the same practice. Also, this doc takes on a fairly light patient load, so she says it's very rare that she doesn't deliver her patients.

I grilled her pretty hard about her thoughts on Cesarians for twins and her surgical philosophy. I know it's pretty likely that I will not have a vaginal birth, and I am ok with that. (Please, no lectures on this. I'd like a vaginal delivery, but chances are fairly unlikely, and I am not up for the first twin being vaginal with the second being rushed to emergency Cesarian under duress. I've read the stats, and I feel comfortable going with the flow and planning for best decision at the time.) The main thing is if I have surgery, that I want to be sewn up VERY conscientiously so that my athletic career can continue with decent core strength after recovery. This doc does not cut abdominal muscles (I think that's pretty rare these days anyway) and does not pull out the uterus - does the repair in the cavity. She sounded extremely confident in her surgical ability. She, herself, has had one vaginal and one Cesarian birth.

I was upfront in telling her that next week I have another OB appointment with another doc. This other one is head of obstetrics at the hospital we'll be using. I'm sure he'll be good, too, and then I'll have to make a decision. At this point, I am just really thrilled that I've found someone I can definitely be confident with!

My belly is getting harder and popping out a bit. I think I look like a person who drank a few too many beers during the holidays (ok, and ate a few hundred cookies, too). The days of buttoning my pants are over, and soon I will have to get some maternity stuff. I have a few friends who have offered to send me or lend me some of their togs, which I think is super generous and nice. 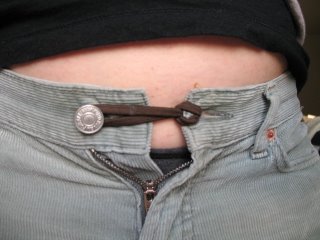 I've already rigged up my pants with a hair band in the way that my friend showed me - it's a good little trick! Unfortunately does not stop the zipper from flying low, though.

The low blood sugar eating frenzy seems to have calmed just a bit. I still need to eat regularly and carefully, but I don't seem to be crashing quite as hard or as often. Must come in spurts?
Posted by YouGuysKnow at 4:25 PM

It is so imp. to find a doctor you are comfortable, so good for you for being proactive and finding a new one! It is so hard to find the Magic Trilogy: Great doctor, well run office, convenient appt times and location. And I love your pants solution! But you may want to look into maternity wear soon... I just discovered elastic waistbands (gasp!) and they are SO comfortable! Oh, I second the slow-down on the eating frenzy. I have a bag of salt & vinegar chips that have are still in my cabinet after 5 days. That wouldn't have happened a couple of weeks ago....

If there's only one thing I can say, it's that maternity pants are so damn comfortable. I gave up after 9 weeks. Gap so far are my favorite, and you can usually find them nwt on ebay for much cheaper.

Cute bump, ut! You sound so happy and confident about the OB switch. good for you. I'd 2nd the recommendation for Gap pants and jeans. I'm still in mine at 29 weeks.

Yes, I'd agree that the hunger spurts come and go, just as your growing pains will. I can always tell when I'm having a growth spurt now--there's tremendous hunger, followed by lots of ligament pains at night, then two new pounds on the scale a few days later instead of just one.

Your efforts to find the right ob sound great! I'll be very interested to hear what the other doctor you are interviewing says about c-sections. I haven't gotten into details with my docs yet, but I'm like you--okay with a c-section if that's the way it has to be. I'd like to start finding out as many details as possible.

Good luck with the dr. search! I had a c-section with my twins... mine ended up being an emergency one. I am glad that I didn't have to do a vag birth and a c-section though, that scared me!

Love the pants 'adjuster'. If you don't want the zipper to low, try a large safety pin sideways across where you want the lowest point of the zipper and that should hold you for a little while. :)

That OB sounds amazing - a c-section without cutting ab muscles, it would be nice if they would all learn how to do that.

I haven't done up a zipper in so long I'm not sure I remember how! I know you didn't request advice but I loved my "Belly Band", it covers the fact that your zipper is half down and lets you wear regular pants a few weeks long. But then again, I second Statia - maternity pants are so comfy!

Hee hee- look at your belly! I love it!