First of all, RIP cyst. You have hereby been banished from the Queendom... ie: aspirated. Procedure was 100% painless. Felt a little tired after, which is to be expected, but no nausea or anything. I would say the one nice thing about having gone through this is that it's the exact same procedure for retrieval, so I'll know what to expect. Fingers crossed that I get the same anesthesiologist for my retrieval day. He did a good job. 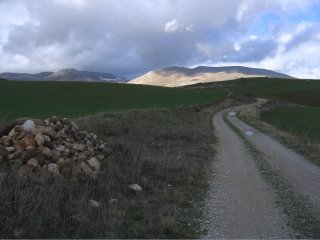 Guess what guys? I HAVE FINALLY STARTED IVF #1! Can you friggin' believe it? I know there's a long, (bumpy) road ahead but I've finally stepped onto that road and started walking. I did my first injections about 1/2 hour after the procedure this morning with nurse N instructing and Hubs observing so that he could remind me later of any details I might have been too fuzzy to absorb.

I have to say, I had zero hesitation. I was so damn happy to finally be getting started I just stuck the needles right in. It didn't hurt at all. One in the abdomen, one in the outer thigh. Short, thin little subcutaneous needles. It was SO not dramatic. (Okay, I WAS still a little bit on drugs, so I'll give you that, but seriously, for those of you who haven't been initiated yet: it is not nearly as big a deal as you might imagine. Unfounded fear is the biggest problem with the injection stuff. And I count myself in that club! Read this post to see my initial reaction to the box of drugs and syringes when I first received them back in March.)

Here is my basic protocol, of course with the understanding that the stim days could be extended or shortened and that med amounts could change (I don't know the precise IUs yet for anything else - will update).

And I'm not aware of my exact antral follicle count, but it's something around 7-ish on each ovary. I hope they like to party... (addendum: as Bea said in the comments, "just hard enough.")
Posted by YouGuysKnow at 10:44 AM

And wow for having no hesitation! I'm sorry, but I'm going to have to blame that one on the recent anaesthetic, otherwise you'll make me all jealous.

Hope you're follicles like to party just hard enough!

You are on your way now! Good luck!

Excellent to hear that you've begun!!!! All the best of luck - I do hope your ovaries are ready to party as well.

I am so glad you are on your way!! Good luck! I will be thinking of you and keep us posted!

Congrats on starting and I admire you for your no hesitation with the needles. I have to say that I never really got used to them, but really now that I am experiencing a different kind of pain altogether, the needles really didn't seem so bad. If we ever have to go through the injection business again, I'm sure it would be much easier. Good luck!!

On the cyst: good riddance.

Starting a new course of treatment does give a bit of a rush. I hope this turns out to be the one!

On your way finally!
That is wondeful news! And 7 on each side is a great way to start.
Best of luck to you!

I'm so glad that the aspiration went well and that you now are officially starting IVF. I wish you all the best with this cycle!

Yay for starting!!!!! That's wonderful. I'll be thinking nothing but positive thoughts for you!

I am so excited for you! I hope that this cycle goes smoothly. Hugs!

Sending positive thoughts you way that this is THE cycle for you!

Congrats on starting your cycle! How exciting...sending you positive vibes!

Great! And you are right, the injections really are not a big deal. But still, I had to take a deep breath when it had been a while since I did the the last one!!

I hope your cycle is great and gives you a BFP :)

Excellent news, Your Majesty. I'm so glad you are on your way. I agree with you - the needles are anti-climatic. Ask me if I am singing the same tune when I start PIO tommorrow night.

The thing with the needles and you are right, it is so great to be started, particularly if you have been benched. It is like you finally get permission to ride.

Great needle technique...Hesitation can lead to some ouchy injections. So glad to hear the cyst is gone and that you are finally on your way!

'M TOTALLY FREE FROM HEPATITIS B
I’m Stephenie Brown, i was diagnosed with Hepatitis B 4 years ago, i lived in pain with the knowledge that i wasn’t going to ever be well again.I have used several antiviral medications include Entacavir,lamivudine but this could not fight the virus off me rather i got side effects of fever,muscle and joint pain.After  spending so much money on antiviral drugs but I never get better.I made a research on the internet for herbal medicine. AS I was determined to get my lifestyle back and to be able to do things I am restricted from doing, I saw a lady’s post on how Herbal Dr. JAMES cured her  from Hiv virus with his herbal mix medicine. I contacted the same Doctor through his email....drjamesherbalmix@gmail.com....we spoke, i told him all that I have been going through and he told me not to worry that everything will be more better again so he prepared his herbal mix medicine and sent it to me through DHL courier company and told me the usage,after 21 days of completing the herbal medicine,i was totally free from Hepatitis B,I went to see a doctor for a blood test ,After taking a sample of my blood for the test the result came out negative,i just can’t deny that i’m the most happiest woman on earth this very moment ,i’m so happy and thanks to Herbal Doctor JAMES,He also told me he cures  diseases   such as Alzheimer's disease,schizophrenia,Autism.Bipolar disorder,  Shingles,Melasma,Underactive thyroid, Melanoma ,Cancer,Weak Erection,Wart Remover,Hpv,Herpes,Fibromyalgia,Hiv,Hepatitis b,Liver/Kidney Inflammatory,Epilepsy,Fibroid,Diabetes,Dercum,Copd,Back pain,Nephrotic syndrome,Contact him on his email and get rid of your diseases,he is a good man.....drjamesherbalmix@gmail.com