Checking the Scenery Along the Way 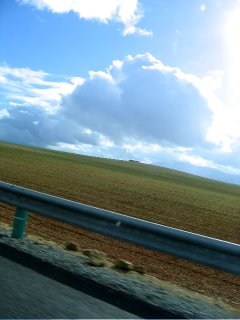 Still truckin' along. Had my Day 7 examination today. The follicles are still doing their thing:

I forgot to get my E2 number from last time, but they drew blood again today, so I know it's being carfully monitored. Endometrium thickness was 8.9-ish.

Tomorrow night I shoot the hCG trigger at 7:45PM and you know that can only mean one thing... retrieval is scheduled for Thursday morning bright and early. Hopefully more of the follicles will plump up and mature to where they need to be - around 20. My RE seems pleased with progress so far.

Physically I feel pretty much normal. Maybe a bit tired but my gut's feeling good and I am thankful. Also, I think maybe the estrogen patches are having a calming effect, mentally. Or perhaps I am inventing this! But I feel pretty chill. And chill is good. Another reason for feeling relaxed is...

A few hours after my RE checkup, I went for an appointment with the acupuncturist who will be supporting me during my embryo replacement - before and after. (My regular acupuncturist will unfortunately be out of town, but it's all working out.) My "substitute" is really good and I had a nice session with her today. She works out of part of the office where my RE is located, so I saw him when I was coming out and he spontaneously gave me a hug. It was cool. He's a great doc and I know he hopes the best for me - for all his patients. Nothing wrong with a human touch in my book.

Anyhow, I asked the "substitute" actupuncturist to use bigger needles on me next time. She used really thin ones this time because it was my first session with her and she likes to go easy on people at first. But I told her that I am used to bigger needles and that she could use bigger ones during the replacement. Holy crap. I think I'm getting addicted to things being stuck in me. Seriously. It feels good. (Maybe I should report this to my therapist.)
Posted by YouGuysKnow at 4:10 PM

I'll be thinking of you on Thursday. I hope your follies get nice and big!

Things are looking great! I will be on bed rest so I will be refreshing like mad for your update on Thursday. Scary, but I am addicted to the bigger needles too; looking forward to my sessions with my acupuncturist tommorrow.

Sounds like you are almost there. Good luck with your retrieval!

Not long to go now, I have it all crossed for you.

I LOVE acupuncture... apparently I am also addicted to needles. :)

GOOD LUCK!!! I have got everything crossed for you.

Sounds like everything is progressing very nicely... good luck on your trigger!

I also tagged you - oops!

Hey! I have been so busy at work that I haven't been keeping up with by blog reading. That is an awesome follicle report! I'll be thinking about you on Thursday.

I LOVE acupuncture too! I missed my appointment last week and I am all out of sorts.
Happy trigger-ing!

Well geez. I had no idea that there were different sizes of needles. huh.

I'll be thinking about ya.

I am addicted to acupuncture too. Good luck with trigger and retrieval. You are in my thoughts. Hugs!

Things are looking good. Good luck--I will be thinking of you on Thursday. Grow follicles grow!!

From all these comments about acupuncture I am beginning to think I am missing something! Good luck with the retrieval. Will be thinking of you.

Hey there! How did the trigger shot go? Can't wait to hear how ER goes. Don't make us wait too long!