Went to the RE for our second-to-last checkup. Here are Batman and Robin in their Bat-sacs in the Batcave at 10w1d. 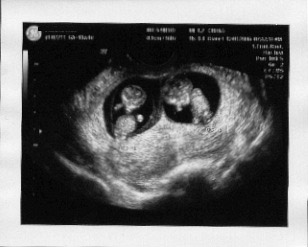 The little wiggler on the left was waving her/his arms around and the one on the right was sleeping until the end of the ultrasound when he/she woke up and started wiggling around as well. I can't feel anything yet. When do you think I will be able to feel them moving? I have heard that with first pregnancies, you feel it later (because you don't know what it feels like?)...

And here is a wacky 3D photo of either Batman or Robin. I find it kinda freaky - it's so... REAL. 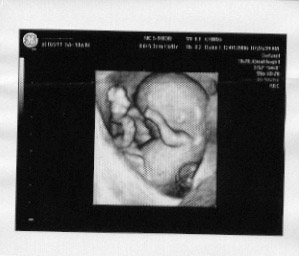 They are only about the size of kumquats but so detailed already. I didn't know that so much differentiation happens by this point. It made a big impression on Hubs as well.

We had our genetic counselling session to prep for our CVS testing one week from tomorrow. Learned a few new things, but we went into it fairly schooled up already. Really hoping everything will be ok. Stats are on our side (chance of 1:82 for each fetus - which means 1:41 overall - that something would be found to be wrong)... but we do know at least 2 couples who have had very bad results and have had to terminate. So, we are aware that anything can happen.

Nausea seems to be lessening in the past few days, but it's early yet, so not sure I'm out of the woods with that. Still getting desperately tired by about 3PM. Feels kinda like the worst sort of jet-lag. But overall, doing pretty well. And mentally, though I still have moments of disbelief, panic... I am going on 3 weeks now of a much-improved mental state. For that, I could not be more grateful.

UPDATE: Forget that above comment about nausea lessening. I blew technicolor chunks last night for the first time, ruining my record of "haven't thrown up yet." And it was this totally nice stew that Hubs had made. I felt bad about that (but not as bad as I do about all the blood vessels I broke around my eyes from yacking so hard). Almost lost it this morning as well. Is this gonna suddenly get worse NOW? At 10 1/2 weeks? Sheesh.
Posted by YouGuysKnow at 12:43 AM

Awww, they look so great! What a neat 3D pic.

Hang in there with the nausea and tiredness. My nausea began subsiding around 12 weeks - granted, with a singleton, but your relief may be coming before you know it.

As for the movement, I began feeling the little one at just 15 weeks. It was quite unreliable, though... I'd feel the baby once or twice and then not again for a week. It was close to 20 weeks that I began feeling fetal movement a little every day.

Those are some really cool pics!

Great pics, it must make it so real! Let this be good news, for all four of you!

This is just so good. You are giving me a little bit of hope. :) Stay well (or, at least, well enough). Good luck with the CVS.

Those are unbelievable pictures! Congratulations!

I'm glad you're feeling good about this PG, and that you can feel realistic without the dark cloud. Things have never looked better.

Good luck with the CVS.

Hi, just stumbled upon your blog and am almost to my 1st beta test...4 more days...my 1st IVF cycle...I have very diminished ovarian reserve and only produced 4 follicles on high stims and only 1 egg fertilized. We did a day 2 transfer.

Anyway, what RE do you go to and would you recommend him? I am in CA as well.

anon, send me your email address and I will contact you.

So glad to hear all is going well!

They're beautiful. I hope am so glad that you are doing well.

I hope that it doesn't get worse now. I had one of my worst sick spells around 10 weeks.
As for feeling them move, I don't know if it's different for twins but I didn't feel it until around 19wks (although my doctor could feel it at around 16).

Oooooooooohhhhhhhh HOLEY BATMAN! I am sooo happy for you! Wow, I really have been away too long :)

Congratulations on your wiggling Kumquats ;) WHuich are delicious by the way!

I am so excited to hear your good news!! Yipee...twins!

Congratulations! The U/S photos are so gratifying (especially after you've had U/S's for less fun reasons). My nausea had a last hurrah before it got better -- I was nauseous for a while, but only threw up once, at about 13 or 14 weeks -- then it all went away for months (until heartburn set in!). I think my first kicks were around 15 or 16 weeks -- though in the beginning I was unsure (was that my tummy growling?)... I could best describe it as bubbles in my abdomen, though everyone describes it differently... though later they were wallops! Hang in there, and good luck with the CVS.